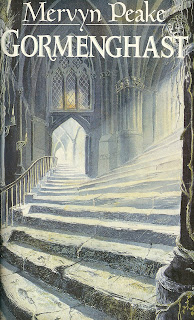 This book deals much more with Titus as he grows in maturity through childhood and adolescence and in the decline of Steerpike, who featured heavily in the first part of the trilogy.

There are many twists and turns in this story.  The epic scale of the Gormanghast kingdom is emphasised, together with the slavish devotion to rituals, many of which have lost their original significance and/or utility, but are nevertheless re-enacted according to the complex schedules laid down in the library of ritual.

The principal driver of the plot is rebellion:  Steerpike plotting a personal rebellion against his peers and his overlords in his quest for ever more power.  Titus is also rebelling, in his case against the duty that he is required to follow as he is the central figure around which all of the ceremonies are performed.  It is these rebellions that cause disruption in the daily lives of the citizens of a society that cannot countenance or even conceive of anyone that does not consider the structure of Gormenghast to be integral to their being.

Once again Mervyn Peake treats us to a narrative that delivers sweeping descriptions of a vast, but ultimately crumbling kingdom.  The characters are as extreme as in the first novel, but with the unfolding of the story, the individuals also develop and I felt more involved with them.  Overall I thought this was a worthy continuation of the tale.
Posted by Neville at 1:19 PM No comments:

For a while I have been thinking it would be a good idea to keep track of the books I read. I tend to read quite a bit, with the topics generally being in the sci-fi, fantasy, thrillers and Victorian classics (Dickens, Elliot, Hardy, etc.). So this is a means of keeping track of what I've read, when and my thoughts about it. Should I discover more of the author or has it turned me off that author for good? We'll see how this develops as it is something of an experiment and may well change in intent and execution as time passes.
Posted by Neville at 4:11 AM No comments:

This is the second time I've read this first book in the Gormenghast Trilogy. The first time was many years ago (in the eighties I think). The book opens describing the vast and overwhelming landscape and architecture of Gormenghast, a castle / citadel / kingdom. where the majority of the trilogy is located. I love the way Peake uses language to evoke the atmosphere of the book, one where everything seems engrained by the passing centuries of devotion to the rituals that drive the daily activities. His characters are in one sense, cartoonish in their extremes of attributes, while at the same time being real and believeable enough to generate the empathy to want to follow them through this saga.

Although this book is titled 'Titus Groan', Titus himself is an infant, with the book beginning on the day of his birth and following the events of Gormenghast and its characters.  Titus plays almost no part in this book, other than being the cause of rituals being performed that are triggers for, or the actual scene of dramatic events that are part of this unusual saga.
Posted by Neville at 2:56 PM No comments: